Recently I published a chapter in an edited book on sociolinguistic research entitled On the Border of Language and Dialect. As I write in the intro, most of the authors of the volume (e.g. Preston, Palander & Riionheimo, Laakso, Koivisto, Kunnas) "organize their studies along geographical borders vis-à-vis perceptions of dialects" while


this article elaborates on a spatial approach to language practices in educational settings, investigating how teachers establish relationships between languages, states, and speakers. The focus is on ways in which they co-construct geographical and political formations while reflecting on school spaces and institutional language policies in conversation with the researcher. 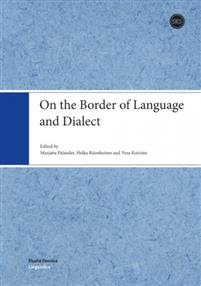 To build such a spatial approach, I apply a linguistic landscape approach to education. The chapter is built on fieldwork in Hungary and Finland, and makes comparisons between educational ideologies strongly and not so strongly bound to standardism. I investigate a wide range of diversity-related ideologies and compare two communities with different social and historical backgrounds: Hungarians whose education is considered strongly standard-oriented and Finns whose educational practices do not promote standardism that much.
Editors of this volume provided a lot of space to elaborate on comparisons which is much appreciated. The publication process was relatively long (roughly 3.5 years from the point of submitting the chapter proposal) so it's indeed rewarding to see (and touch) the published book at last!
According to information from the editors, the book will later be published online as an Open Access document, so stay tuned for an update if you can't get your copy immediately!
Update: you can read the entire publication online here: https://oa.finlit.fi/site/books/10.21435/sflin.21/

tapeszab
I'm a researcher at the University of Jyväskylä, interested in education, language ideologies, studies on interaction, visual language use...